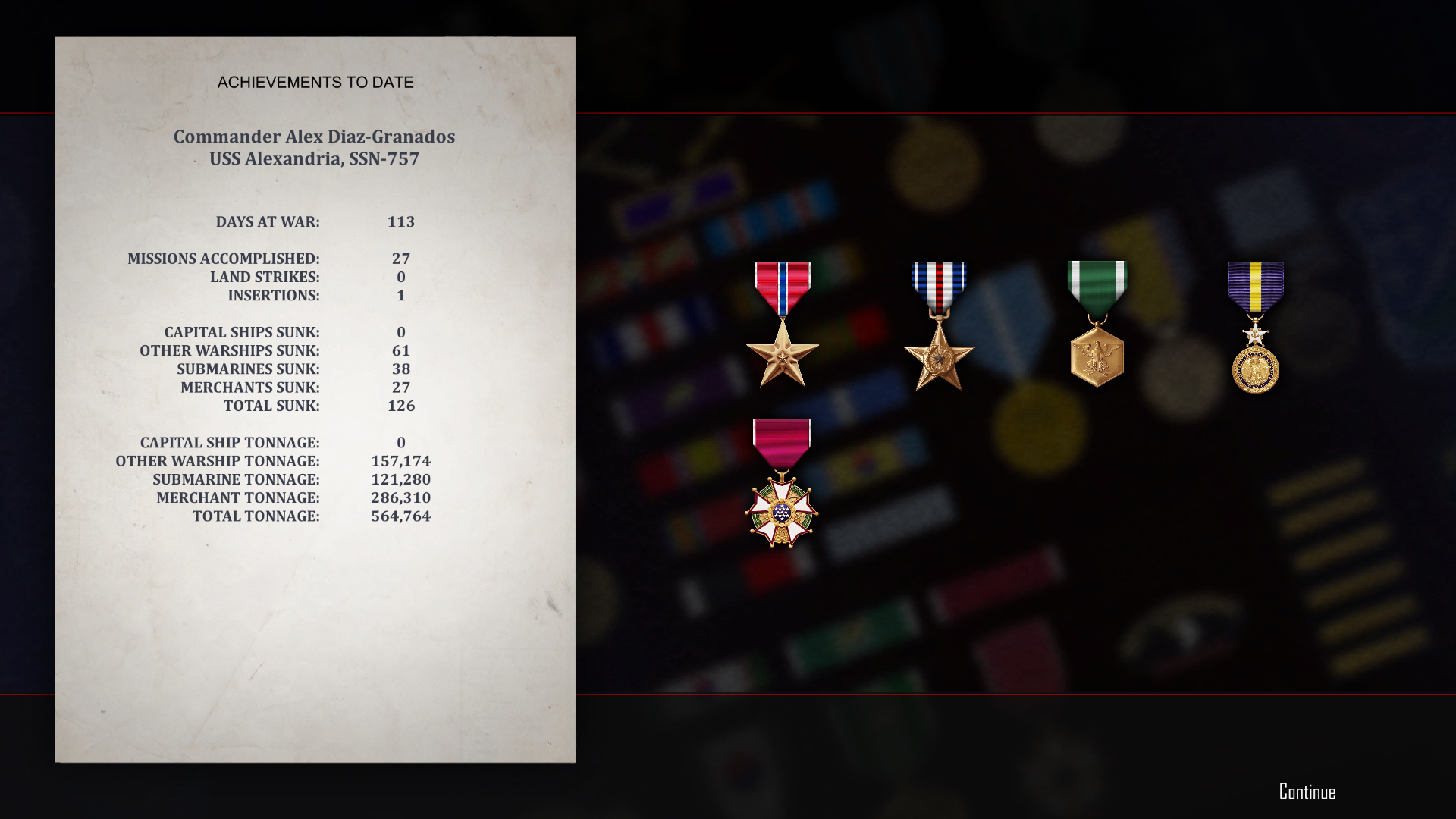 Well, Dear Reader, I did it. I successfully completed a Campaign game in Killerfish Games’ 2017 submarine combat simulation, Cold Waters.

And not only did I complete the Campaign – which has a default skill-level setting of Hard and balances out the American Navy’s advanced submarines vis a vis the submarines fielded by the People’s Republic of China by forcing them to operate in shallow waters[1] and adding Soviet warships and/or subs to the People’s Liberation Army Navy (PLAN) – but I was able to win it, too.

This is not, of course, the first time I finish a campaign in a computer war game. I have owned many military-themed games – ranging from operational level strategy games such as Crusade in Europe (MicroProse, 1986), which features a grand campaign that focuses on the Liberation of France from June to October of 1944 to flight simulators such as Microsoft’s Combat Flight Simulator 1: Europe or MicroProse’s F-15 Strike Eagle III, which has not one but three campaigns – Desert Storm, Korea, and Panama.

This is also not the first submarine sim I’ve played which features a campaign mode. MicroProse included campaigns in both Red Storm Rising (1988) and Silent Service II (1990). [2]   I played through the “entire war” campaigns in RSR and SS2 several times back in the 1990s and on different skill level settings, too. I still recall with some sense of accomplishment that I once completed the Silent Service II War Career campaign with such a good battle record that I finished World War II as a rear admiral (lower half) and with a Medal of Honor, the nation’s highest award for courage under fire.

That having been said, I feel a sense of accomplishment after playing Cold Waters because:

Overall, I ended the war with five decorations:

Luckily for the Free World in this alternate history of the late 20th Century, even though I lost five boats and nearly lost a sixth (USS Alexandria – SSN-757, an Improved Los Angeles-class sub) during a mission to sink a Xia-class ballistic missile submarine (an SSBN or “boomer”), I completed most of the assignments given to me by COMSUBPAC at Pearl Harbor, including a difficult intercept of a Chinese commando unit that was bound for U.S.-liberated Hong Kong aboard a stealthy Romeo-class diesel-electric sub.

I also sent much of the People’s Liberation Army Navy to Davy Jones’ locker. My final tally was:

There are, of course, two more Campaigns in Cold Waters, North Atlantic 1984 and North Atlantic 1968. Both pit U.S. subs against the Red Navy of the Union of Soviet Socialist Republics, although they are set in two different historical periods. North Atlantic 1984 is perhaps the most “Tom Clancy’s Red Storm Rising-like” scenario, since it features warships and aircraft that were in service during the first Reagan Administration. I’d guess this would be slightly more difficult than the South China Sea 2000 campaign because the “best” U.S. sub available is the “Flight-I” Los Angeles class, which entered service in 1976. Older classes, such as the Sturgeon, Skipjack, and Permit boats, are also present. The best subs fielded by the Russians are likely the Alfas and Sierras, and the Kiev-class tactical aviation cruisers and Kirov-class will be available to the Red Fleet as well.

The hardest campaign, I think, will be North Atlantic 1968. The Soviets won’t have Alfas, Kiev aviation cruisers, or Kirovs, but they’ll have the largest submarine force in the world, and the Americans will have, at best, Sturgeons and Permits as their top-of-the-line boats. Also, there will be no Mark-48 wire-guided torpedoes or UGM-84 missiles; those weapons systems were introduced in the early 1970s, so Cold Waters will not feature them in their version of 1968, either.

I have a screenplay to work on and other types of blog posts, such as book reviews and “personal thoughts,” to write, so I will not be diving into either of these two campaigns in Cold Waters any time soon. I’ll eventually get around to playing either North Atlantic 1984 or North Atlantic 1968, but not yet.

For now, I’m content with my first successful campaign in this fun but challenging sub warfare game.

[1] In most of the books I’ve read about modern submarine warfare, fast attack boats (SSNs) lose many of the advantages they usually possess – especially the ability to evade enemy torpedoes by diving deep quickly – in the shallow waters of the South and East China Seas.

[2] Of the two MicroProse submarine game titles I mention here, Silent Service II is the most ambitious since it challenges the player to command a boat – or a series of boats – through the entire Pacific War (December 7, 1941-August 15, 1945). One could, of course, change the start date of that campaign to any time after Pearl Harbor Day, but I believe the game gave players higher awards depending on difficulty level chosen and when they started the War Career, as well as war patrol results and enemy tonnage sunk.

Alex Diaz-Granados (1963- ) began writing movie reviews as a staff writer and Entertainment Editor for his high school newspaper in the early 1980s and was the Diversions editor for Miami-Dade Community College, South Campus' student newspaper for one semester. Using his experiences in those publications, Alex has been raving and ranting about the movies online since 2003 at various web sites, including Amazon, Ciao and Epinions. In addition to writing reviews, Alex has written or co-written three films ("A Simple Ad," "Clown 345," and "Ronnie and the Pursuit of the Elusive Bliss") for actor-director Juan Carlos Hernandez. You can find his reviews and essays on his blogs, A Certain Point of View and A Certain Point of View, Too. View more posts